Verizon has pulled their ad featuring the two Pit Bulls, but too little too late--the damage has been done. I hope the people who came up with that brilliant advertising scheme see the following video and realize that behind each and every chained guard dog is a dog that wanted nothing more than to be a pet.

So, I have had the last few days off of work and have been watching the controversy unfold surrounding the new Verizon commercial. The fact of the matter is, whether I love the commericial or hate it (hmm, guess which one?) the ad has been extremely effective. More people, after reading about it, will have googled it on youtube. By drawing attention to the commercial we, the consumer have played directly into Verizon's hand. And it sucks. One of those you're damned if you do and you're damned if you don't scenarios. And while I'm at it, as much as I know that Pit Bulls do not need anything promoting the negative images surrounding the breed, I am more upset that the company promotes animal abuse. Chained guard dogs, with no shelter and food. I have met dogs that have been rescued from this fate; they are eternally grateful to be a part of a family.

So, I couldn't resist. I too have contributed to the problem. I just had to comment.

Thanks Surrey Leader! (oh and Amanda too!)

Amanda Muir is one of our volunteers and who has been involved with animal rescue for quite some time now. Here is a picture of her at our BBQ with her then foster dog Crash. What an amazing article for such an amazing individual. 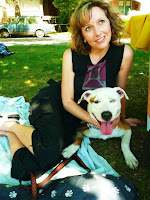 We recieved an email from this family. Their dog Gaia went missing in the Kits neighborhood. If you hear or see anything, please contact them.


HER NAME IS GAIA, SHE A SMALL STAFFORDSHIRE TERRIER, BLACK WITH WHITE MARKINGS ON HER

CHIN AND CHEST. SHE IS VERY SWEET BUT WILL BE SCARED OF YOU. IF YOU SEE HER, PLEASE 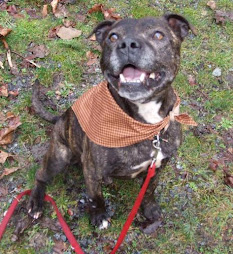 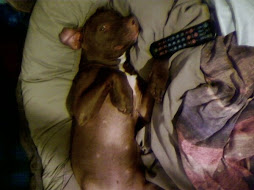